Review: A Visitor's Companion to Tudor England by Suzannah Lipscomb 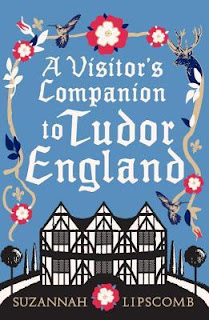 Did you know...Robert Dudley, Earl of Leicester entertained Elizabeth I at Kenilworth Castle for 19 long days in 1575, in one last attempt to win her hand in marriage? In Oxford you can still see the charred door of Balliol College that was licked  by the immense fire that Mary I had built to burn three famous martyrs who refused to renounce their protestant faith. Mary Queen of Scots was imprisoned many times in cold and dank Tutbury castle, before plotting to assassinate Elizabeth I by smuggling messages out in beer barrels. But she was led into a trap, which cost her her head. Henry VIII was twice betrayed at Pontefract Castle. It was overrun during a rebellion in 1536, and Katherine Howard entertained her lover, Thomas Culpeper, there is 1541.

I know I said not long back that I was tired of the Tudors, and I still am. Or rather tired of that TV show, and people thinking that whatever was shown on it is fact. But anyway, it makes a change to read a book about the Tudor dynasty that really can refresh you, and reawaken an interest. I have previously read Suzannah Lipscomb's "1536" which was absolutely brilliant, and this book is just as brilliant. But what I liked most about this book is that it doesn't bog the reader down with complicated analysis - this book is aimed at everyone, not just those who want to read academic history. It can be used as a guide as you explore the buildings of Tudor England, explaining the main stories that happened there during the Tudor era; or it can be a starting point if you want to read a little introduction in the way of the houses, castles and buildings of Tudor England. And Lipscomb does this in a clear, concise and interesting way that makes the book a wonderful page turner.

Lipscomb splits the book up into geographical areas - London and Greater London, South East, South West etc which means that the pages flow nicely. It also helps if you're going to be visiting a particular area and fancy picking a few Tudor sites to see while you're there! What I also liked was that for each building, Lipscomb was very to the point and gave the reader only what is needed - the main reason why said building is an interesting place for Tudor history as well as a few other little bits of Tudor-esque stuff to see there. This meant that each building had just a matter of pages to explain its importance, and it does just enough to whet your appetite.

What surprised me was just how many Tudor buildings there actually are in the country. I knew about the main ones such as the Tower, Hampton Court etc but it seems there are a lot more Tudor treasures kicking about the country than one first thinks, For example, I went to University in Winchester and knew that the Cathedral was where Mary I and Phillip of Spain were married but I had no idea that nestled in the local neighbourhood was The Vyne, a once massive mansion (almost the size of Hampton Court in its hey day!) owned by William, Lord Sandys. The fact that it is so close to where I live even now has got my feet itching for a sojourn up there! In fact it seems wherever you are in the country, there is a Tudor treasure just around the corner. Next time I'm visiting my family up in the West Midlands I'll be making a point of re-visiting Kenilworth Castle and Shakespeare's birthplace after reading about them in this book, and reading the short chapters on these two fantastic places brought back some really rather good memories. But always among the places I knew, were little gems that I had no idea about. For instance - I had no idea that the doors of Balliol College in Oxford show scorch marks from the flames that burnt three famous protestant martyrs, Ketts Oak and the many mansions/palaces that still stand today. The stories that go with each of these places are enough to make your mind race.

As I found with "1536", Lipscomb's writing style is very easy to read, and it flows nicely. There is something about the structure of her work that makes the words seem to dance off the page. And I have to say, as I read this at the same time as a rather large tome on Charles II which is full of politics (and thus can get rather dry), it was a nice change to be able to escape into something light and that wasn't bogged down with huge lists of academic references. Now don't get me wrong, I am a big, BIG fan of references and in academic books they are an absolute god send. In my Charles book, they are proving to be very helpful (and it does irritate me no end when an academic book isn't referenced properly) HOWEVER Lipscomb's book is not meant to be a full blown academic book. She says both in her introduction and in the acknowledgements section that the book isn't meant to be just for academics, but for everyone and thus, a fully referenced "visitors guide" just wouldn't have cut it. This, for me, was a very brave thing for Lipscomb to do and in my opinion she managed to pull it off exceptionally well.

This book will certainly help out hugely when looking for my next trip out to a sixteenth century house/palace/cathedral and I intend on going back to it. As I mentioned above, it is a great starting point and stepping stone into the history of these wonderful places - and if you want to learn any more information then you can (especially as Lipscomb provides a rather excellent further reading list at the end of the book also). I honestly recommend this book to anyone interested in Tudor history, and to anyone interested in visiting some of the wonderful Tudor sites dotted around the English countryside.

Due to both spam and some rather nasty individuals all comments will be moderated.

Find Us On Google+